King Noodle House Pho Hoang is a small Vietnamese shop in Chinatown Edmonton. Their speciality is pho, and let me tell you, they do a really good job at it. It is also known as the restaurant with the owner who has a very intricate beard (shown in the picture above). 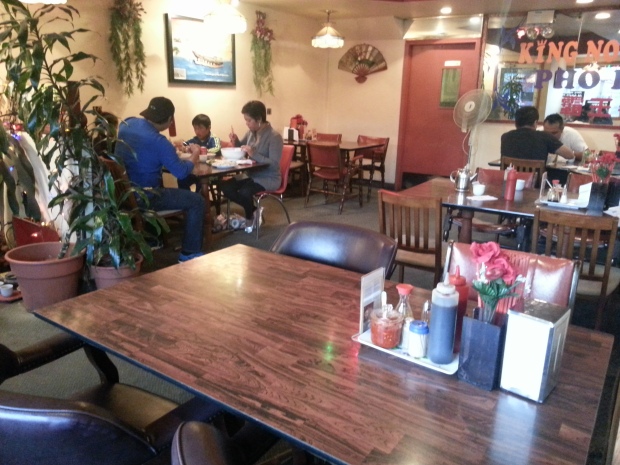 The restaurant is built into a larger building so it was very difficult to notice it despite the large sign. It is a pretty small shop and can seat maximum of 40 people. The restaurant’s decorations are awkward to say the least. The walls are decorated with a fan,  a painting of a boat, and wooden model of a boat, and a random array of plants. The light fixtures look like they are from the 70s or 80s.  The plastic tabletops are flimsy and the chairs are all mismatched. I wouldn’t say that this is the worst I’ve seen, but its definitely up there on my list. But for a pho place, it doesn’t really matter. All that matters is if the pho is good. 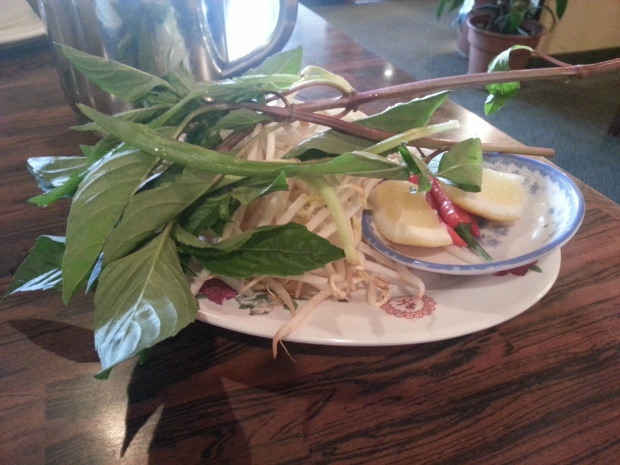 I ordered #10, the Large Pho with raw beef, flank, and brisket. A few minutes later, the owner (The guy with the beard), brought us some tea and our pho condiments which included bean sprouts, fresh basil, chili peppers, and lemon. Lemon? Pho is usually accompanied with lime, but I’m just being picky.

The pho was delicious. It was garnished with green onions, cilantro, and yellow onions. The broth was rich, flavourful, and devoid of any MSG that I could taste. To my pleasant surprise, there was a very buttery taste to the broth that just made this taste amazing. They also did not skimp on the beef, which a lot of pho places tend to do (There is also the option to double the beef for $1-2 more). This one was loaded with beef and the beef was very good. The brisket was the beefiest tasting, with a buttery taste from the fats that surround it, The flank was leaner but had a good flavour to it as well. The raw beef was extremely tender since it cooked to perfection in the broth.  The noodles were also cooked perfectly. Not too chewy, not too soft, and the right thickness. The size of the pho was pretty fair as well. For ~$8.50, its a decent size with a very generous amount of meat.

This is the best well rounded pho I have had in Edmonton. I’ve tried the raved about Tau Bay and was disappointed. King Noodle House’s noodles, amount of beef, and quality of the beef wins over Tau Bay. The guy with the mustache is also definitely worth seeing, My only complaint was his customer service.  It feels like he is rushing you out and didn’t even want you there in the first place. Firstly, he isn’t very friendly when he takes your order. Secondly, he takes away your dishes, i.e. the bean sprouts, 10 seconds after your pho arrives, when you haven’t even finished adding them to your dish. He doesn’t even ask if  you are finished with it before he takes it away. But hey, their pho is amazing so I can let that go. Give it a try.