I had never ventured past Spadina on foot on any street. However I did see on instagram a picture of this cafe and the caption “Guava Cheesecake”. I love guava flavoured drinks and was very interested in trying this cheesecake. This cafe is located on Queen West, in the Fashion District (that I didn’t even know existed). My cousin and I walked here on a really nice day, and we really enjoyed the walk, as we discovered lots of new shops (fabric and bling-bling bead shops) we would never have been able to find. It’s funny how you’ve lived in a city for so long and because you don’t venture out of your comfort zone, there are always places you don’t know about. 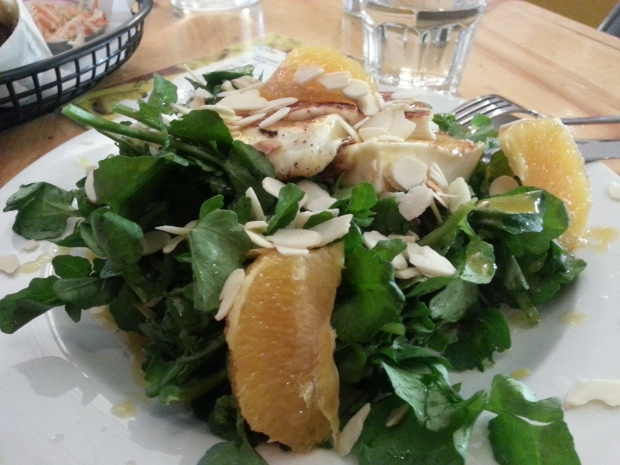 We arrived and were pretty hungry. I really wanted to eat a salad, and we opted for the Watercress in orange vinagrette, with oranges, sliced almonds and warm fresco cheese. It was really refreshing on this day, and a really fruity tasting salad. I’ve recently started to notice a lot of watercress salads which is interesting and new to me, since I’ve only ever had watercress in the Asian soups that my mom likes to make. 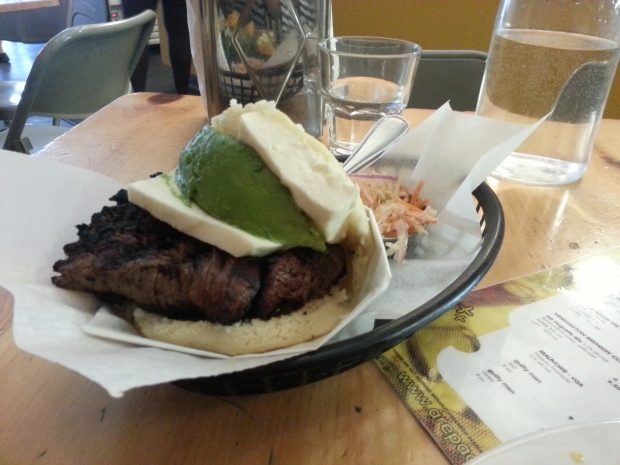 We also ordered la llanera, which comes with beef tenderloin, avocado, fresco cheese and tomato. We were also given condiments to add, including garlic mayo, pesto and peppercorn. It was pretty good, but the beef was really dry. The condiments made a world of difference in terms of adding some moisture to the dish. The corn meal bread was something that I hadn’t tried before. It was interesting, but I don’t think I’d consider it something I’d pick over other types of bread.

Finally, we got to the reason I had discovered this restaurant in the first place: the guava cheesecake. The dish was decorated with guava syrup dotted on the side of the plate. I have to be honest, this cheesecake failed to come even close to my expectations. Perhaps I expected too much…Either way, I was just having a regular cheesecake, and there was almost no guava taste. The little guava icing that was on the top was of true guava flavour, and didn’t do much for the cheesecake. The base of the cake was an interesting mix of oats and granola though, which was something I hadn’t seen much of before.

Overall this cafe is cute and is a nice place to go if you want to try something new (or at least it’s new to me, as I’ve never had Venezuelan cuisine before). The food was decent, and came quite quickly. The service was attentive but not annoying which can be hard to achieve in a small cafe. Although I enjoyed my experience, I don’t think I’ll be visiting any time soon, as corn meal bread does not appeal to me, and the guava cheesecake was a disappointment. As for the salad, I am confident I can make something quite similar at home. But if you’ve been wanting to try some new flavours, I do suggest you to check out their arepas!