Well here is an interesting restaurant. Located on a country road in St. Albert near Edmonton, is a restaurant that is part of The Enjoy Centre, which includes a market, spa, and boutique shops. The restaurant is decorated beautifully, with a style that is young, modern, and fun.  The entire restaurant is covered with glass and filled with trees and shrubs, which makes you feel like you are dining in a greenhouse. You can see in the pictures of the restaurant below. 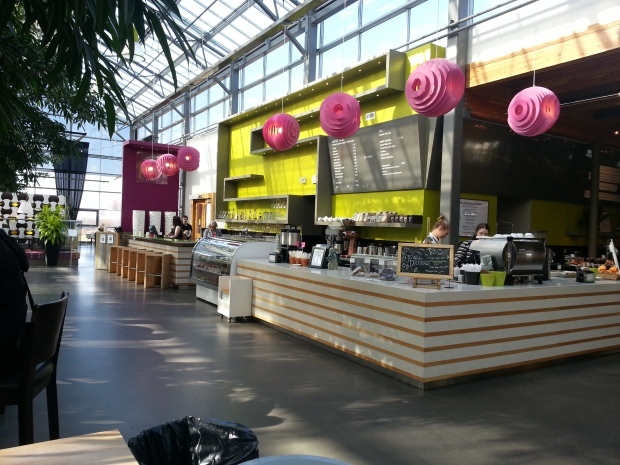 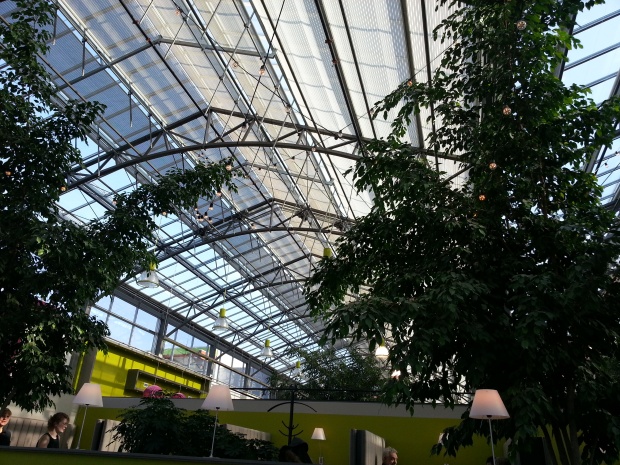 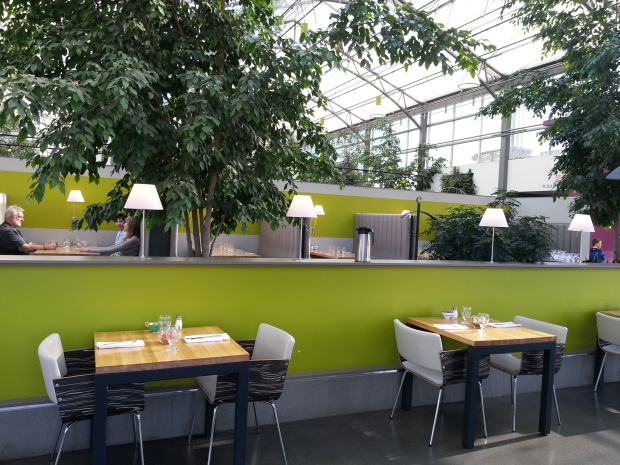 I ordered the fresh pressed juice with orange, apple and ginger. The juice was fresh and the combination of apple and orange went well together. I was worried about the amount of ginger in the juice but the taste of the ginger was not overwhelming and it pleasantly added a bit of kick to the juice. The only issue was that for $5, you get very little juice with a large glass, which makes the quantity of juice seem even smaller.

Karen ordered the yogurt. It was delicious. The yogurt and the berry compote were as fresh as it gets. Mixed with the house granola and raisins, it was the perfect yogurt combination. Definitely worth the $4.

For my main, I had the baked eggs. I was a little disappointed with this dish. The eggs themselves were good. However the sauce underneath the eggs, which was a heavily spiced cumin tomato sauce was not. It was too heavy on the cumin and too salty, which ended up masking the taste of the eggs and feta cheese. All I could taste was the spicy sauce, which wasn’t good in the first place. The house hash wasn’t bad but nothing spectacular to boast about. It was a bit bland and the potatoes were too soft for my liking. The bread, which was likely made in house, was great though. Overall, a poor dish, but definitely deserves credit for having such fresh ingredients.

Karen ordered the farmers scramble which included turkey sausage, scrambled eggs, winter vegetables, and hash (sweet potato and yellow potatoes similar in my dish). This dish was ok. The sausage was definitely the star of this dish, but the hash was similar to mine in that it was a bit bland and too soft. The eggs were also a bit overdone and dry. It was a pretty average dish and not worth $16.

Glass house bistro is a beautifully decorated hyper-local restaurant that cultivates and utilizes its own organic foods to create wholesome dishes. There is no doubt that the ingredients that go into the food are as fresh as it gets. However, their creativity with their ingredients in making not only a dish that is fresh, but innovative is lacking. There is nothing amazingly special about their dishes and that is certainly one area that they can improve on.