I had visited tfung half a year ago in Edmonton, and I hadn’t written about this brunch place since then. But here it is, Culina Muttart:

Obviously, coming from Montreal, I had to try some brunch in Edmonton. Thus far, we favoured Duchess as our brunch location, even though they only really have pastry-related dishes. So we set out for this scenic location, in the Muttart Observatory, just off the Saskatchewan River. Obviously I stopped in the parking lot and on our way to the restaurant to snap some pictures because fall in Edmonton is absolutely breathtaking. 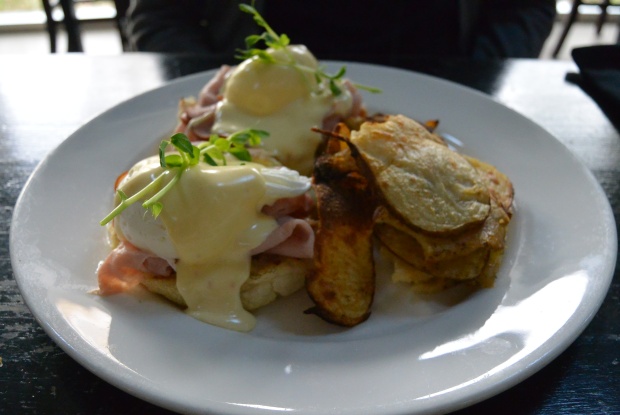 Tfung opted for the eggs benedict. Unfortunately, they decided that the yolk of an eggs benedict had to be fully cooked on the inside. The sauce was incredibly fatty, and didn’t have enough flavour. The ham was cold cut that was pre-packaged from a local grocery store. If it wasn’t for the great lighting and scenery, I probably would have hated my meal here.

For me, I ordered the French Toast. Prior to ordering, I had asked if they used cinnamon in it (as most French Toasts do), and if there was, I’d order something else. The waitress assured me that there was no cinnamon in it, so I proceeded with ordering it. The sauce came incredibly watery, but the toast seemed delicious even though one of the toast was not really cooked to the rest of the toasts’ colour. I had a small bite and instantly tasted cinnamon. I asked the girl again, and she checked with the chef, and indeed, there was cinnamon. She then offered me to switch for something else.

So I opted for the good old BLT, as that had never failed me. And it didn’t this time. The BLT was absolutely delicious and probably the best tasting thing here. The bread was crunchy, but still yeasty in the center. The bacon was crispy, and not too salty. The produce was fresh. Finally, something that was delicious!

Overall, this place is wonderful to come and have a snack, not expecting much from the food. And with the beautiful scenery in the fall, their food really doesn’t need to impress. However, as a food enthusiast, I was definitely disappointed that they would fully cook the yolk of an eggs benedict. Other than that and the mishap with the cinnamon, Culina Muttart is a fairly pleasant place to eat at. Just as long as you like cinnamon and don’t order the eggs benny.