I was very lucky to have been able to go to Sushi Nakazawa on the eve of my 24th birthday. Tfung was incredibly sweet to take me, and we were able to book the bar. The bar seats 10 guests, and since they were all pairs, I believe there were 5 reservations made at 12am, exactly 30 days prior. This is important when booking: make sure you have fast internet connection, and you have the windows open at around 11:50pm to wait for the 12:00am mark!

We were promptly seated when we walked in (even though we were embarrassingly 7 minutes late). Luckily, there were a fair few couples that had not showed up yet, so I felt a little more at ease. To be seated, we were told to climb up onto the high chair and then the hostess had to physically push us in while on the chair, due to the design of the bar. They are very nice about it, though I did find it a little annoying if you had to go use the restroom.

Already placed were the black lacquer serving plates, chopsticks and two glasses (wine and water). As we sat down, the waitress came around with hot towels, to clean our hands with. She then asked for our choice in water, brought it, and then set down little white plates with a folded wet napkin sitting on it. This was for cleaning the fingers if one chooses to use their hands to eat the sushi.

When all the guests were properly seated, Nakazawa greeted each of us with formality, as per tradition. (I revel in this kind of stuff). Then he said we would begin. He explained generally how it works, that the sushi is served as it is to be eaten. There will be 21 pieces, and asked if we were hungry, as it will be filling. He added that if we were starting to feel too full, we can tell him and he would reduce the amount of rice, as everyone is to finish each piece of fish.

Then, he started. There were 5 chefs total. Chef Nakazawa, 2 sous chefs (one on either side of him) and 2 assistant chefs. Everyone was well situated into their roles and had no hesitation. The role of the sous chefs were to slice the fish, torch the fish, and to cook the shrimp. The other sous chef was in charge of the plating. Chef Nakazawa puts the sushi together, the fish, the rice, the wasabi and the soy sauce. I was buzzing in my seat from the excitement that is about to unfold. I felt like I didn’t have enough eyes and brain capacity to take in every detail that I wanted to.

The chefs had very particular ways of handling their tools. Everything is wiped down and cleaned before commencing the next step. Tools and equipment are always placed in the space they should be filling after each use. Everything is clean, sanitary, and of top quality. Having taken lots of food safety courses, I often scrutinize restaurants (especially if they have an open kitchen) on their sanitary practices. There was nothing that made me raise a red flag so far. 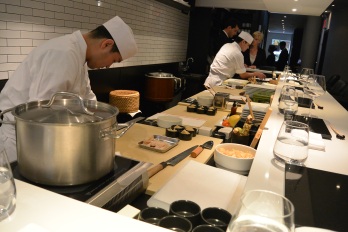 Preparation prior to Nakazawa’s greeting 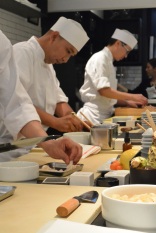 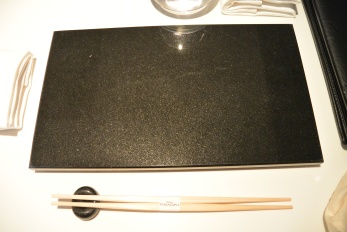 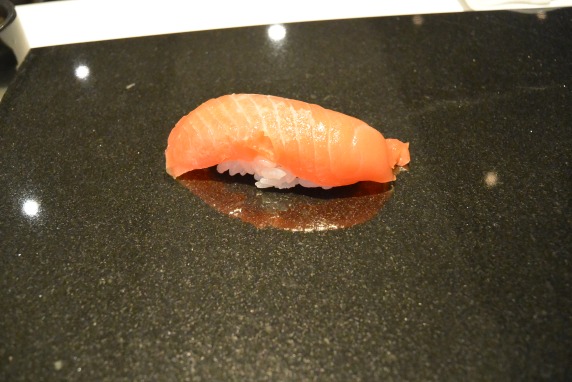 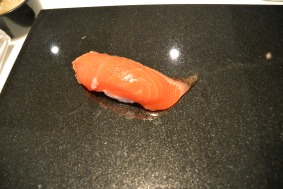 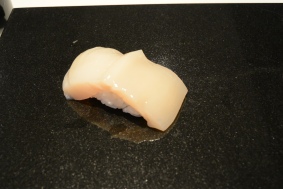 Scallop from Maine with yuzu and pepper. [Texture was firm, taste was fresh and sweet. However, the pepper was too overpowering] 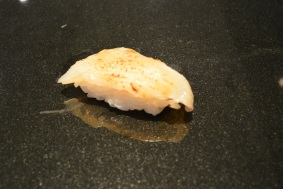 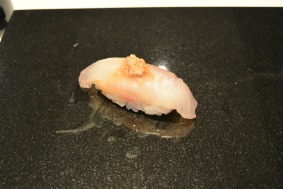 Trigger fish from Long Island, garnished with trigger fish liver. [Chewy, slightly string-like texture. Fish is of a softer flavour but was enhanced by the liver. The liver was fishy and buttery.] 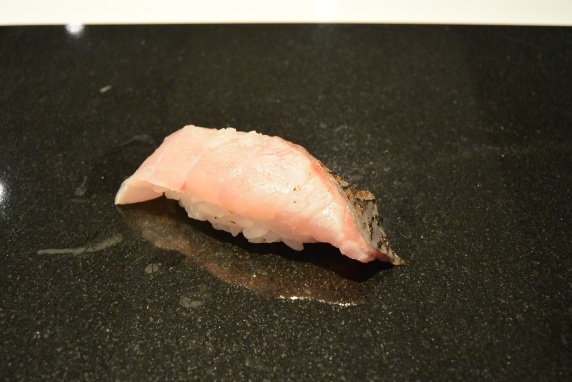 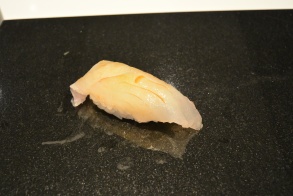 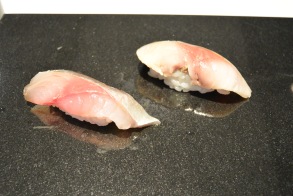 Two way mackerel: fresh horse mackerel and mackerel aged 7 days from Japan with ginger sauce. [Both were buttery and very silky. Aged mackerel was much richer in flavour.] 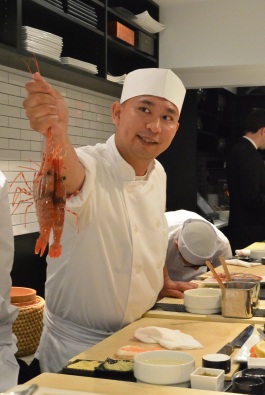 Nakazawa showing us the live prawns before he beheads them, saying happily, “Sayounara!” 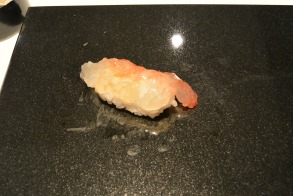 Small head prawn from California. [Crisp, crunchy, and sweet. Killed and served within 2 minutes. Does not become pasty as most raw shrimp does] 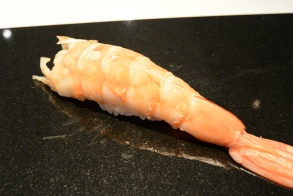 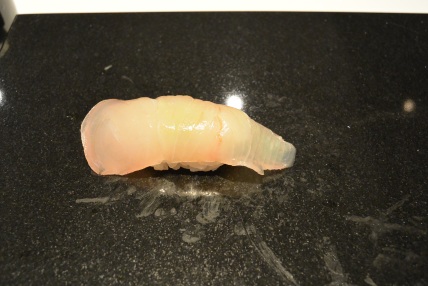 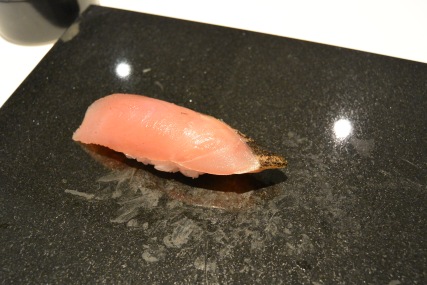 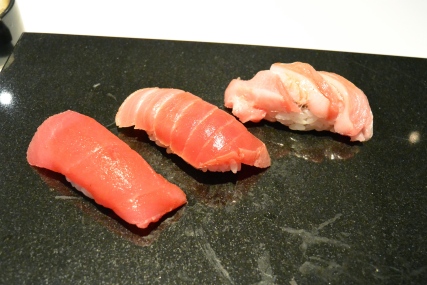 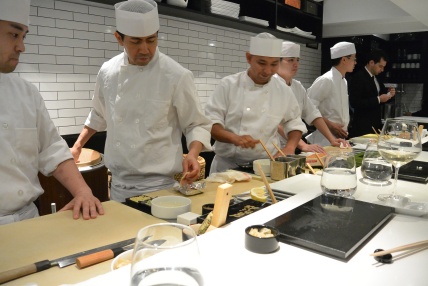 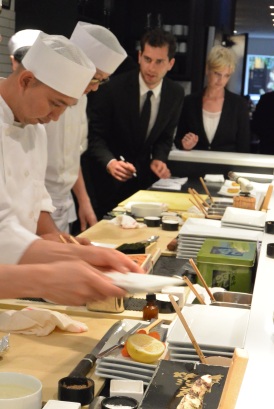 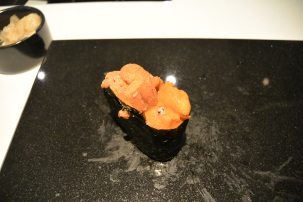 Uni from Hokkaido with black truffle and pink of salt. [Very buttery and creamy texture that melts in your mouth. Slight bitter taste (during and after). The taste evolves as you chew and savour through the combination with rice and seaweed] 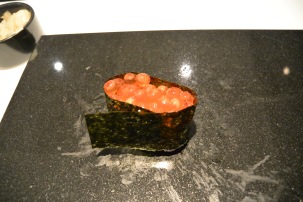 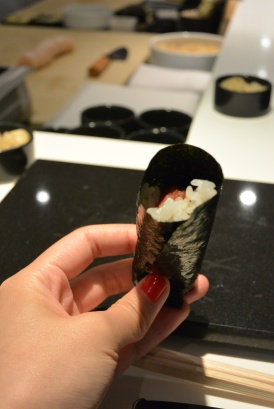 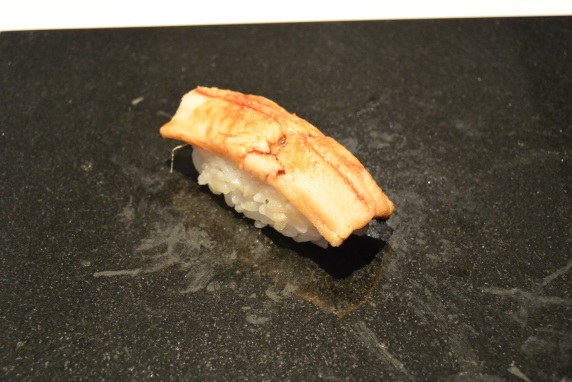 Sea Eel from Sushima, Japan [Too sweet and a little too soft] 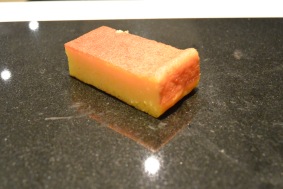 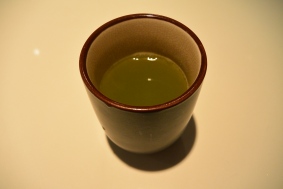 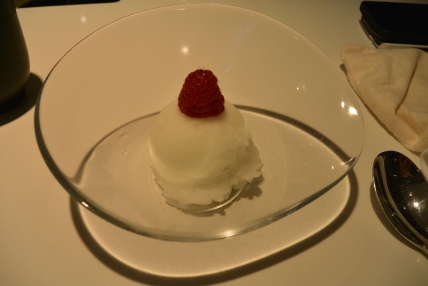 Yuzu Sorbet with a frozen blackberry surprise inside, topped with a fresh raspberry 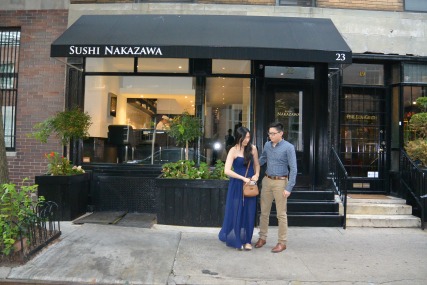 Can’t go wrong with a little bit of candidness 🙂

The experience was amazing. He did not disappoint. From food, to service, to decor, to experience, everything was on point. He explains every fish right before he serves it, even using his Samsung Galaxy Tablet to show us what the fish actually looks like in the ocean (for the less common ones like Trigger fish). He looks like he enjoys what he does, cracks jokes with the clients, creating a different atmosphere and tone each time you visit. Everything is timed perfectly, for example, the cooking of the shrimp. Everyone’s minds are sharp and they know exactly what to do next, without ever losing complete focus on the task at hand. You can tell their minds were not wandering to their hot date tonight or any such trivial matters. Their passion was sushi, and they try their best to create perfect pieces of art.

My verdict: if you can afford the hefty price, you should definitely go. It is probably as close you can get to Jiro’s sushi without needing to know too much Japanese. Due to Nakazawa’s fluency in English, there is no language barrier. I will say though, that if you don’t get a bar reservation, it might not be worth your time (especially if you’re from out of town). There is no experience, and the sushi will not be prepared by Nakazawa himself. It is simply just not the same. It was definitely one of my most memorable birthday memories, and I’m so glad to have shared it with someone who loves eating and sushi as much as I do!

There was an error retrieving images from Instagram. An attempt will be remade in a few minutes.