So following our trip to Ferry Building Market, we wanted to head over to the Fisherman’s Wharf. We had originally wanted to take the streetcar but we lined up for 20 minutes and no one in the line were able to get on since all 5 of the streetcars that passed were full.

So we decided to walk it, since we could use the exercise anyway.

Our first stop was Boudin Sourdough Bakery and Cafe. We had to google streetview this place so many times because we were worried we wouldn’t be able to find it. It was useless in the end because Fisherman’s Wharf has changed so much since whenever the pictures were done. We found it in the flurry of vibrant and lively shops at one end of the wharf. There was a huge line so we split up. Tfung lined up and ordered food, while I went to wait for a table. We ended up getting a turkey avocado sandwich and the clam chowder soup in the sourdough bread bowl. The sandwich was actually REALLY good, and it’s too bad I didn’t get a good picture of it. The turkey and the fresh avocado went really well together.

The clam chowder was thick, and creamy, but was not overly so. However, there were very few clams in the chowder, so I was slightly disappointed, since I like a clam chowder with A LOT of clams. The flavour was good, but I have definitely had better clam chowder before. It just lacked that clam taste that I was looking for, which would make it a rich tasting clam chowder. With that being said, the sourdough bread was absolutely delicious with the chowder. But there was so much that we couldn’t finish it!

After doing some light shopping around Fisherman’s Wharf, we proceeded to Scoma’s Restaurant.

We only wanted one thing, which was cold crab and that was exactly and the only thing we ordered. The full crab costs $30, which was a little pricey. 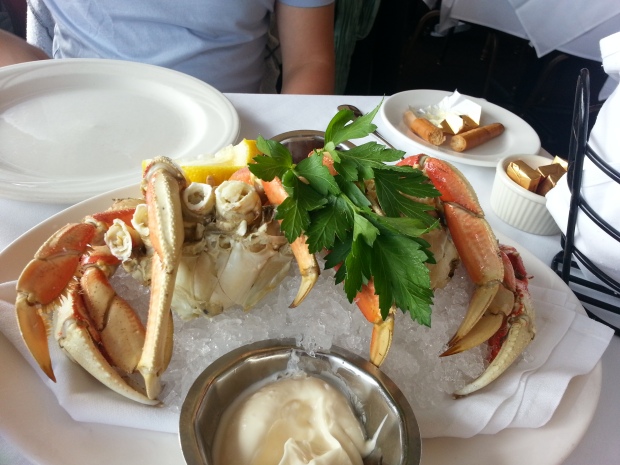 It really was very fresh, sweet and juicy. We don’t like to use any sauces or lemon because we love to taste the true flavour of the crab. It was really tasty and tfung was so sweet to peel some of the crab legs for me 🙂

Overall I thought both restaurants were just touristy, bucket list places. The food at Scoma’s was without a doubt good. The prices were a bit high, but it was not surprising since it was in the most touristy area of San Francisco. The restaurant’s style is that of an old tug boat, which fits nicely as a restaurant on the Wharf. However we both noticed a stale, musky smell, which turned us off our appetite a little bit. The service wasn’t bad, but it also felt they were rushing us to finish and serve the next customer.